Six Degrees of Separation: The Value of Network Analysis

This data analysis technique, both an art and a science, produces insightful visualizations.

Imagine your delight when one of your social media accounts recommends a long-lost friend with whom you haven’t been in contact in years. You scratch your head for a moment wondering how on earth the social platform knew you and your friend were once connected, but happily click the “Add Friend” button in eager anticipation of reconnecting.

You’ve just experienced network analysis – the science (and art!) of representing traditional data as a network in order to find relationships and connections between objects. In the context of business, government, and other entities, network analysis is often used to understand the flow of information, identify influencers, and predict future trends.

Our team at Arboretica are experts in network analysis. It is the core of our technology, powered by our best-in-class open source data collection, data structuring capabilities, and natural language processing algorithms.

Let’s take a deeper look at how network analysis works and explore some of its potential applications.

What is network analysis?

Network analysis begins with data, which is transformed into a network representation consisting of nodes (objects) and edges (relationships or connections between objects). The resulting map provides previously unseen insights.

Once the data is represented as a network, we can customize its details to uncover various insights including relationships, influencers, and future trends.

Network representation is a powerful data visualization tool. It communicates insights that might be difficult to articulate with words, and it is something that is easily understood by people without technical expertise.

Before: Data organized in a spreadsheet 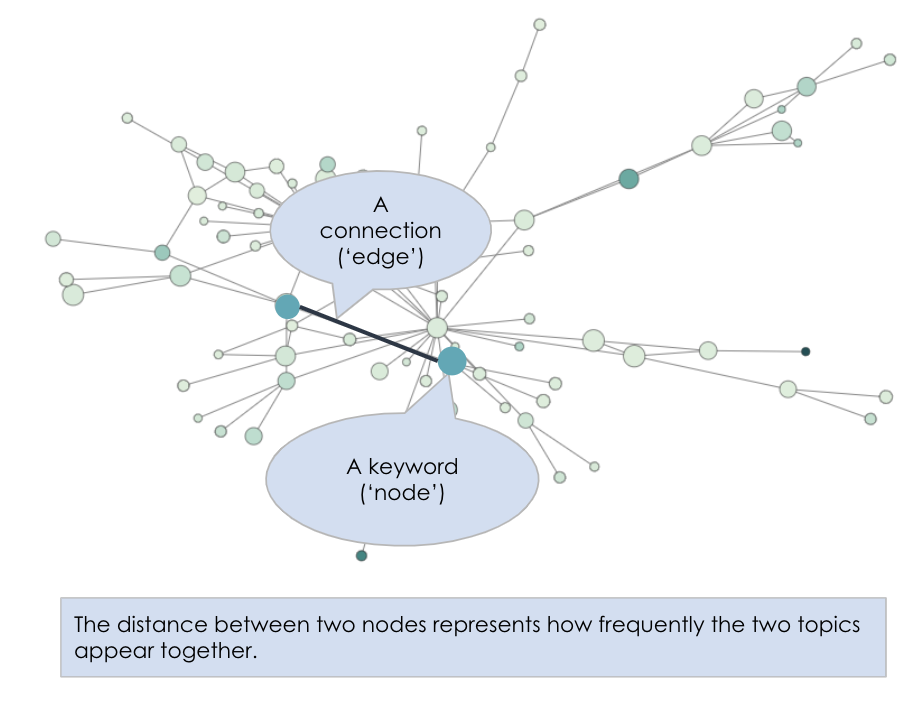 After: Data represented as a network

Network analysis helps understand conversations and how information is flowing.

Imagine we want to identify influencers from a set of tweets. When putting tweets into a traditional table of data, we are only able to count the number of followers per user or the amount of engagement per tweet.

But when we create a network that connects two users who have mentioned, replied, or retweeted each other, then we see behavior from another angle. A center of activity begins to emerge, where particular users are mentioned by many people, or get lots of replies to their tweets.

This activity identifies influencers, but these might not be influencers in the traditional sense of the person with the most followers. Depending on the business need, the influencer might be the person who has the most engagement, the most interactions, or the most mentions. It also helps identify sub-communities within the overall network, as shown on the network map below.

The expertise required to create a map for network analysis

The science of network analysis is well-established, and the algorithms that are applied to surface connections are fairly tried and true as well. Creating a network map, however, is more challenging than meets the eye. There are two areas of “secret sauce” in creating the network map:

Network Analysis in the Wild

In one of our most recent engagements, our team worked with a luxury durables manufacturer to develop a social network analysis. The goal was to understand the types of conversations in which the client was mentioned. These insights could drive product and marketing strategy.

We aggregated and analyzed social posts that referenced the company, and created a network map focused on those conversations’ keywords and topics. We found that most conversations were focused on two key topics — neither of which was a brand message the manufacturer was currently emphasizing.

Network analysis of social media conversations allowed us to recommend to our client the following:

With network analysis, we are providing a new lens through which to look at information, and furthering our mission of bringing value from public data to the masses.

If you’re interested in learning more about network analysis or seeing how it could be applied to your business, reach out to our team.

How can we help?

Please contact us for any challenges you are facing

This website uses cookies to improve your experience while you navigate through the website. Out of these, the cookies that are categorized as necessary are stored on your browser as they are essential for the working of basic functionalities of the website. We also use third-party cookies that help us analyze and understand how you use this website. These cookies will be stored in your browser only with your consent. You also have the option to opt-out of these cookies. But opting out of some of these cookies may affect your browsing experience.
Necessary Always Enabled
Necessary cookies are absolutely essential for the website to function properly. These cookies ensure basic functionalities and security features of the website, anonymously.
Functional
Functional cookies help to perform certain functionalities like sharing the content of the website on social media platforms, collect feedbacks, and other third-party features.
Performance
Performance cookies are used to understand and analyze the key performance indexes of the website which helps in delivering a better user experience for the visitors.
Analytics
Analytical cookies are used to understand how visitors interact with the website. These cookies help provide information on metrics the number of visitors, bounce rate, traffic source, etc.
Advertisement
Advertisement cookies are used to provide visitors with relevant ads and marketing campaigns. These cookies track visitors across websites and collect information to provide customized ads.
Others
Other uncategorized cookies are those that are being analyzed and have not been classified into a category as yet.
SAVE & ACCEPT